With so few Africans vaccinated against COVID-19, simple and sensitive tests are critical for saving lives.  NEB is donating reagents to aid in the development of diagnostic tests (cLAMP) that can be used instead of PCR and can deliver rapid results detected by a simple color change. They are ideally suited for resource-poor areas by not requiring expensive laboratory equipment.

The state of pandemic efforts in Africa 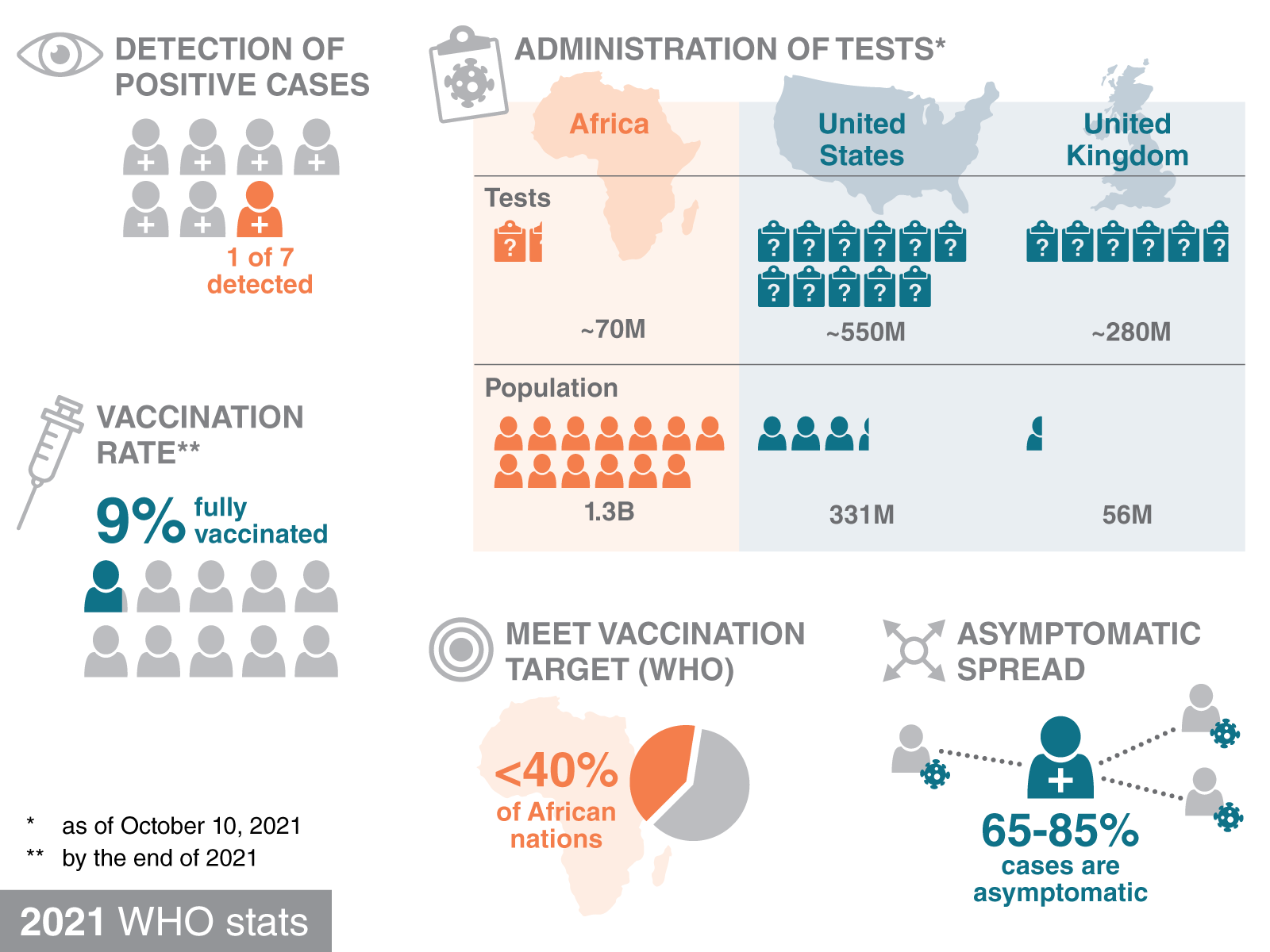 Without higher vaccination rates, increased testing can be used to protect communities from high rates of viral spread. Estimates indicate that 65% – 85% of the cases are asymptomatic, making it easy for infected individuals to spread the virus without their knowledge. To put it bluntly, the lack of inexpensive COVID-19 testing is a big problem in Africa.

Efforts are being made to address the shortcomings of the COVID testing system in Africa. The WHO Regional Office for Africa announced in October 2021 that it would focus $1.8 million in 8 countries to enhance COVID-19 community screening and testing accessibility, aiming to reach some 7 million Africans. The program employs a strategic approach to contact tracing, and provides rapid antigen diagnostic testing to those exposed. It also provides hygiene kits that include face masks and hand sanitizers, to households within a 100-meter radius of an infected person.

New England Biolabs® (NEB®) has collaborated with the International Centre for Genetic Engineering and Biotechnology (ICGEB) to help create an alternative method to diagnose COVID-19 based on the use of the reverse transcriptase loop-mediated isothermal amplification (RT-LAMP) assay. RT-LAMP is a rapid isothermal amplification technology requiring minimal equipment to carry out, making it an  ideal method for locations with limited testing infrastructure. A multicenter observational pilot study has been completed in the African countries of Cameroon, Ethiopia, Kenya, and Nigeria, which demonstrated high specificity and sensitivity of a colorimetric RT-LAMP assay for COVID-19 detection. An expanded Phase II program will soon begin, with reagents donated by NEB, and funding by the Bill & Melinda Gates Foundation.

Test results with a simple change in color

The history of RT-LAMP development at NEB began in the early 2000s. Viral outbreaks in developing nations, such as SARS-CoV-1 (2002-2004), avian H1N1 influenza (2009), Zika (2007-2015) and Ebola (2013-2016 and 2018-2020) highlighted a need for simple, sensitive diagnostic tests that could be performed in low resource settings. With this in mind, NEB initiated research into a novel isothermal amplification technology called LAMP, which was created by Eiken Chemical Co. Ltd.

In 2012, NEB demonstrated that the presence of a nucleic acid target could be detected using colorimetric LAMP –  an assay in which detection occurs through the visual color change of a dye caused by a change in pH. This detection method does not require expensive equipment. Additionally, results can be obtained in 30 minutes and its sensitivity is close to that of qPCR. More recently, NEB was able to show that RT-LAMP provided sensitivity similar to RT-qPCR in the detection of COVID-19 from saliva rather than nasal swabs, making sample collection less invasive.

Overall, continued efforts are needed to enhance testing accessibility within African countries. Africa represents an important part of the global community and access to testing and vaccines impacts the state of the COVID-19 pandemic around the world. The success of alternative low-cost, rapid diagnostic methods in Africa could be a blueprint for other nations struggling to meet their population’s COVID-19 testing needs.

Be part of NEBinspired. Submit your idea to us to have it featured in our blog.